Before talking about this title, a premise is necessary: i am not the target of this game. And probably not even you who are reading. I repeated this phrase to myself several times while I was playing and taking notes, trying to imagine if it was there me child he would have liked this title or not. This is probably a much more similar title to Cooking Mama Cookstardeveloped by the same software house, that the original titles of the series.
So if you are an adult looking for a simil Cooking Mama or a Cooking Simulator less realistic I already tell you to drop this title and this review, since Yum Yum Cookstar has a very limited target unlike the very famous game of Office Create published by 505 Games and which entertained adults and children alike. If you are looking for a gift to give to a son / nephew / brother minor stay quietly listening. It could be the title you are looking for.

Having fun in the kitchen

In Yum Yum Cookstar we will play the role of an aspiring chef struggling with cooking competitions and the judgment of three extravagant judges.
The title contains a large variety of recipes, which will require you to learn the recipes to unlock techniques necessary to perform them (and a consequent level increase).
As expected, each recipe will in fact consist of minigames different from each other. These are many, but some are definitely too similar between them, making the distinction almost useless and senseless.
One aspect that surprised me is the possibility to choose between different difficultiesallowing the player to reach a level of challenge at least normal (the other modes are really too simple).
It is also possible to choose between three different types of commands: movement and buttons, buttons only, buttons and touch screen. Useful to vary a little and find the method that most funs you.
In short, a gameplay which at first seems funny, but which in the long run can be boring because of the often too low difficulty and repetitive minigames.

A game for children, but the translation?

As already specified, Yum Yum Cookstar it is obviously aimed at an audience particularly youngwhich is almost impossible to speak English well.
Why then the instructions are translated into our local language but the dialogues are dubbed in English without no subtitle? Why should a child witness scenes in which he does not understand anything that is being said to him?
A practical example will be the scenes of the judges’ judgments at the end of the recipe: many lines of dialogue only dubbed in English, without any possibility of reading a translation or at least a transcription of what has been said.
Unfortunately I must consider this as an important flaw of this title, given that deprives young audiences of part of the gaming experience.

Customization: it could have been done better

Interesting in this genre of titles is the aspect concerning personalization. Unfortunately not in Yum Yum Cookstar.
As in the series of Cooking Mama, there is no creation of an avatar. Too bad, because I would have liked it and it would have been a peculiarity of this game.
However, it is possible to unlock gods colors for kitchen utensils overcoming recipes on certain difficulties. Nice idea, but the customizations are very simple and I think we could have done a more refined job.
However, I found the possibility of modifying recipes to make them very interesting veganundoubtedly a good step for a cooking game these days (especially if addressed to the very young). Chapeau!

As for the artistic sector of this article, I cannot fail to mention theinconsistency background that I have noticed from this point of view.
Leaving aside the soundtrack (which is at times unnerving and little adherent to the game genre)I would like to dwell ongraphic appearance.
Yum Yum Cookstar has some really cute artworkHowever, they will only be used during the loading screens. The 3D renders of the gods are also very cute competition judgesparticular and well characterized, almost faithful to their artwork.
Too bad that everything else really leaves something to be desired. Yum Yumwho is the character we will interface with most often during the game, has a bland design and it is often devoid of expressivenesswhile the graphics of the gameplay really gives the vibes from mobile game. Nothing against mobile titles, but from a game for Nintendo Switch I expect graphics much better.
Evidently the ideas were there, but I don’t understand why to do it some things very good and others very bad. 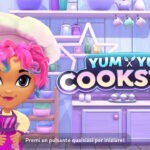 Yum Yum Cookstar it’s a half title. Some aspects are interesting, others are really poor. I must admit that for a child the gameplay could be fun, given that the recipes are many and so are the mini-games (even if in the long run they can be boring, as they are too similar to each other). , but it is also true that a young audience pays less attention to these aspects. The possibility of veganizing the dishes is nice, too bad that it is not enough to save the almost total absence of customization within the title.