Ancient dragons but not only in the next set, you can swear it. The preview event to which we were invited allowed us to discover some juicy extra information on the new content that we need to share.

The arrival of Dragonlands in Teamfight Tactics is expected with the patch 12.11 therefore, as reported on the official site come on Twittermust be circled on the calendar on June 8. During a streaming event attended by the developers of Riot Games we got to know the seven ancient dragons that are about to overturn the Convergence. They are certainly the most important novelty of Set 7 because they are new characters who will flesh out the roster of Champions at our disposal, but also because they are characterized by some peculiarities that make them particularly intriguing.

Aurelion Sol will show us the stars. Literally!

DON’T GET GLAD: BUYING MORE THAN ONE DRAGON WILL NOT ALLOW YOU TO EXPLOIT ITS POTENTIAL

As mentioned, there will be seven dragons that we can buy to strengthen our team or, if we are lucky, receive in rounds 2-7 or 3-7 through a Dragon Orb (it will always be an 8 gold dragon), but it is better if you I present them: Daeja, Idas, Shi Oh Yu, Sy’fen are 8 gold dragons while Ao Shin, Aurelion Son And Shyvana are those of 10 gold. In addition to costing twice as much as other units of the same rarity, each dragon takes up two slots and features the Dragon trait, an intriguing trait that allows him to get triple the bonuses from the Origin traits and a 600 hp increase in health as long as he has a team one dragon. Unless you get the upgrade that allows you to ignore this limit (Dragon Alliance), buying a lot of dragons is therefore not a good idea because it prevents you from exploiting 100% of their potential. Dragonland will bring various traits with it, but the ones listed below are the only ones that the devs focused on during the preview:

Riot Games is fully aware of the importance of Hextech Implants in increasing the variety of each match and how welcome the community is to be able to further customize your build. By virtue of this Draconic Lands renews the dynamic with the new ones Draconic Implantswhich will be available in rounds 2–1, 3–2 and 4–2, plus the chances of getting gold bonuses will be greater and, once per game, we will be able to pay 1 gold to change trio of upgrades to choose from. Dragonlands will also bring the Treasure Dragon, a treasure chest with which to try to further customize your build at the end of the fourth round and which takes the place of the event with the Raptors. From the Treasure Dragon we can take the five treasures that appear to us or try our luck at the price of 1 gold.

THE UPDATE WILL ALSO SEE CHANGES IN THE ROSTER OF CHAMPIONS

Burno, Poggles And Choncc the Wise instead, it is the new Strategists who will keep us company in battle, but obviously the news also concern the roster of Champions at our disposal. Along with the new characters there is also an interesting mini-series of quality of life improvements such as the one related to the management of the rewards provided by the PvE combat at the end of the match, various cosmetic elements of various kinds and, last but not least, an update to the prizes. of the Arena and the Pass. 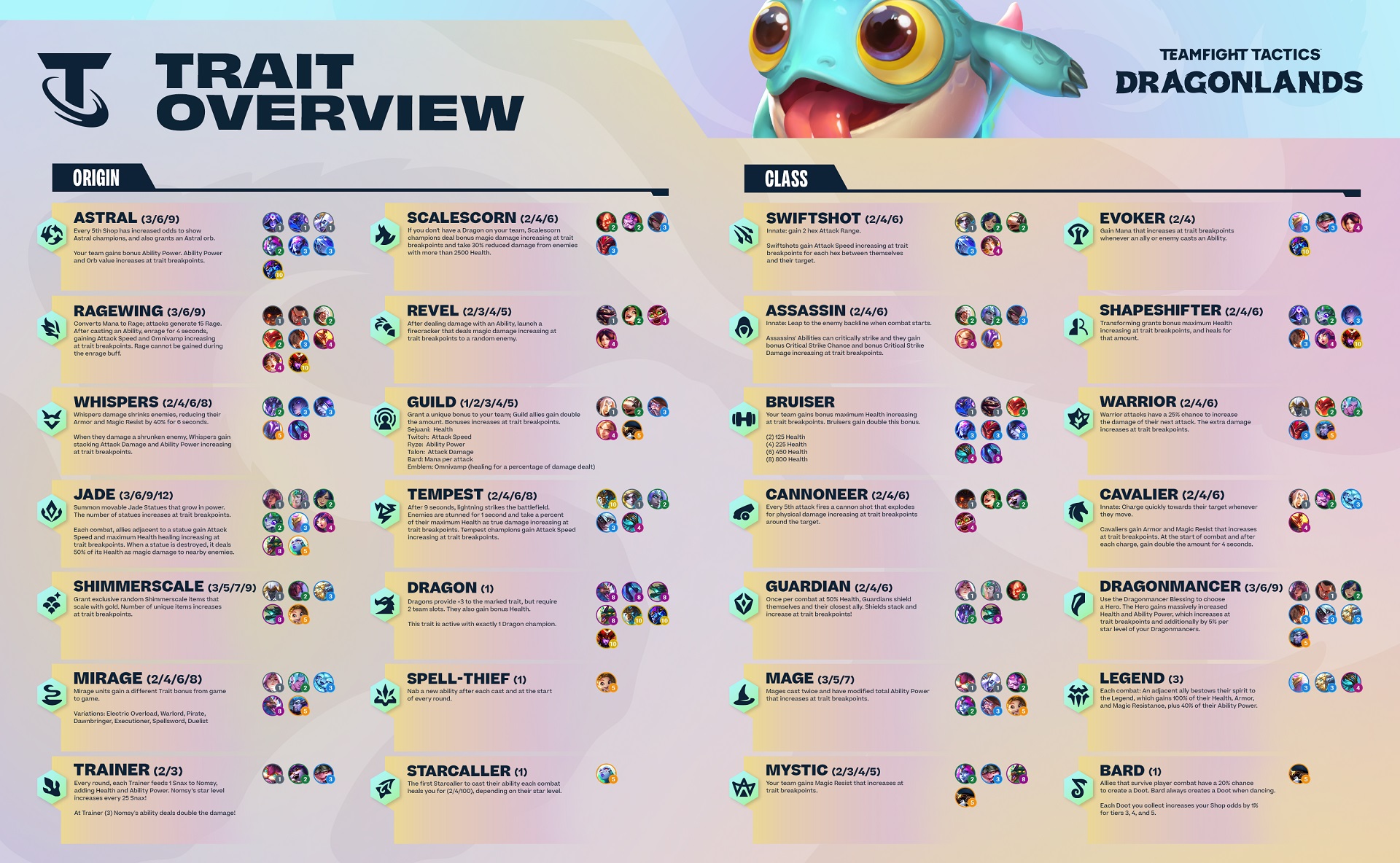 All traits of Draconic Lands.

The overview of the news related to Draconic Lands must stop here, during the event much has been told but not everything has been revealed, as it should be. Draconic moors seems to have all the features in the right place to entice fans of Riot’s auto-battler, between novelties and renewals to the known mechanics, the devs have worked hard to improve their game. The feeling is that the undisputed protagonists of Set 7 and the near future in the Convergence will be the mighty ancient dragons, however something else emerged during the event, something intangible and invisible yet extremely evident: the enthusiasm of the Riot Games devs and their great determination in wanting to perfect Teamfight Tactics at any cost while trying to make the dreams of many fans come true.