Stranger Things has always been a product capable of hitting a broad spectrum. Not all series have this innate ability (mixed with the usual cunning) of knowing and being able to speak to the youngest as well as to the non. The setting of the 80s attracted all the nostalgics to the door and the strong nerd contamination, given the very young stars, brought the whole slice of the public that eats Star Wars, Ghostbusters And D&D.

These were the reasons that led some of the audience to move away from the bizarre – but not ugly – second season and the best succeeded third. But with the fourth, this bridge of connection between generations changes again, it changes into a new skin, inhabiting the clothes of young boys who are no longer children; with high school, first loves, puberty and existential crises, one comes out of that protected ground that is childhood life, to look out into real lifethe violent and ruthless one, therefore as the difficulties increase, the arrival of a demon capable of violently killing the boys in the school, is a fearful, unprecedented and incredibly splatter threat.

One of the many unspoken cinematographic rules foresees the taboo of showing children killed in direct action and we do not know how Del Toro managed to do this with the messy, but always fascinating, Mimic. Say hello to Barb’s sad death, here the new threat is a demon charmer who breaks bones, detonates organs and makes the human body a sheet of flesh that balls up and leaves by the roadside. A modern work of art of blood, flesh, bone and exploded eyeballs.

Never before has Stranger Things been so violent and never has it been so punitive towards poor victimswho live an ordeal made up of atrocious physical suffering up to the disfigurement of the physical body, which for them leads to death, while for the young protagonists it is the signal that the otherworldly nightmares have returned.

stranger things returns with a darker and more violent story arc, together with a fearsome and very dangerous enemy that will keep the young protagonists in check

The Duffer Brothers are aware of the titanic load of expectations that they carry with them and this time they do things calmly, with skill and letting themselves be pampered by the classic logic of events: the end of the third season left many plot points that find a continuation here, so the approximately 80 minutes per episode (that’s right, they are almost mini films) finally have the charisma and rhythm of the great epic stories that dedicate time to exploration intimate of each character; we have arrived at a narrative moment in which we have a really large cast, divided in various parts of the United States as in other areas of the world, and all the pieces will calmly come together to create, this time, a wide-ranging picture, more easy to follow and with plenty of time to get every viewer acclimatized for the new twists.

The last two episodes are missing from the appeal of our preview vision, those that close the season and the cycle of this new adventure, which will be published on July 1 and, with a fifth and final season already confirmed, the events are actually addressing the story towards its final parable.

All in all, Stranger Things season 4 is particularly bold in the way it constructs parables and metaphors to close the childish paranthesis and embrace the teen horror drama, a particularly successful change of gear that will be appreciated by those who asked the show a little more courage and wickedness towards its protagonists.

Once again, Stranger Things is the classic example of a bridge project, which with a structure that is partly simplistic and largely built by simple passion, manages to connect Netflix and the viewer, one type of young audience with another older one. An exquisitely universal project, with easy use and never banal emotions. It is not perfect, but in its genuine imperfection, it is the most precious thing in this particular historical period. 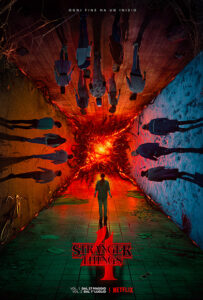 Ubisoft, why don’t you believe in The Division anymore? – Editorial