Oddworld: Soulstormthe last chapter of the homonymous series starring Abe first released in 2021finally lands on Nintendo Switch.
We have already told you about it at the time (in particular of the version for new gen), now let’s talk about how the home title Oddworld Inhabitants it gets along on the console Nintendo.

PS.: I state that I have tested this version of the title on one Nintendo Switch base, so my comments about screen sizes don’t apply to the version OLEDs of the console.

Oddworld: Soulstorm, where were we?

Oddworld: Soulstorm is the latest title in the saga of the same name, released in 2021 for Playstation 4 and 5 and of which the announcement trailer was shown to us during the conference in which the new gen console was shown to us sony.
The title is a reinterpretation of Abe’s Exoddussecond chapter of the saga starring the Mudokon Abebut renewed and enriched by many new mechanics.
In short, a game that fans of the series do not own a console sony they absolutely have to recover. And what better occasion than this port for Nintendo Switch?

Save the Mudokons in portability

Let’s just start by talking about the most important feature that the porting on Nintendo Switch from Oddworld: Soulstorm offers in this title (and to the gamer): the portability.
As we well know, not all titles are suitable to be played on such a small screen and often the ports are uncomfortable or more limited than the launch version. Oddworldhowever, it performs particularly well.
Sitting quietly wherever we prefer, play this title in portability it will be the most comfortable option possible.
Sin that I have encountered are however the commands: many and not very intuitivemaking enough cumbersome the first hours of the game.

I also noticed one input sensitivity a bit particularwhich made some sections of the gameplay more difficult (particularly when it was necessary to hang/descend from a platform).
I also found the aiming systemas it often requires a precision not really necessary which will put us in difficulty in the sections stealth of game.
Obviously it will be enough to play a little for callus and also overcome these problems, for the rest we are faced with a perfect genre to play on Nintendo Switch.

Already the version for PlayStation 5 of the title could be considered decidedly remarkable from the point of view of Artistic direction.
I can say that, at least as far as the cut-scenes and the in-game camera are concerned, the version Nintendo Switch she was not castrated in any way, on the contrary.
I was pleasantly surprised, given that high quality cinematic they hardly make it on the portable console Nintendobut Oddworld: Soulstorm he succeeded in his enterprise.

Stunningly beautiful and captivating, with beautifully expressive character facials, you could almost say you’re watching an animated film. Truly a feast for the eyes, that in the version Nintendo it is worthy of the surrender of the consoles new gen.

But the in-game graphics…

Reluctantly and despite myself I can’t say the same for the graphics of the game world. After seeing some great cut-scenes in fact, we will find ourselves in a game world that leaves one old feeling on. Indeed, we are faced with a title cross-genwhich brought avery interesting innovation as for the game roombut that stopped at old gen as for the in-game look and feel.

The scenarios are indeed well donebut graphically very simple, so as to give me a feeling of confusion when there were multiple elements on the screen (like, for example, flames).
Perhaps from this point of view, playing it portable might not be the best of ideas, given the small size of the screen Nintendo Switch. Little space and so many things to pay attention to.

A feature not to be underestimated is certainly the sound, which is often left aside resulting in mixtures of sounds that in the long run can also be annoying.
Again, this is not the case Oddworld: Soulstormwhere is it the cure for the sound was decidedly excellent.
Music, dialogues and sound effects are perfectly balanced, not forcing me (as usually happens to me) having to adjust the settings due to the volumes busted.
All in all, a very good surprise.

Oddworld: Soulstorm, absolutely to be recovered

Despite the sometimes quite annoying defects, the porting for Nintendo Switch from Oddworld: Soulstorm remains a good way to recover the most recent chapter of this saga.
It is undoubtedly a solid game and that it has all the credentials for to captivate and please the majority of the gaming public of today (but also, and perhaps above all, to the nostalgic).
simple in gameplay, but not easy and without a challenge, with an intriguing and fascinating plot, you mustn’t let it get away. A riot of memories for lovers of the series and a probable new love for newbies.
In short, owners of Nintendo Switch, what are you waiting for to accompany Abe in this adventure? 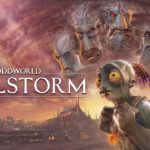 Oddworld: Soulstorm for Nintendo Switch it is certainly a port that was needed and that many felt the need for. The genre of this title applies perfectly to the portability of the Japanese console, whose screen size, however, can be limiting in some sections of the game. The artistic direction, especially as regards the cutscenes, is masterful. Too bad for the commands a bit awkward and too sensitive.