Heroes of Might and Magic is a series that made school and that still has few rivals today, however a new contender has just entered the arena: this is the fascinating Songs of Conquest.

Lavapotion developers they never hid their source of inspiration. The influence that the Heroes of Might and Magic saga has had, and is continuing to have, in the development of Songs of Conquest is evident and oozes from every pixel. Literally. Yes, because the first element that catches the eye in the turn-based strategy of this small independent Swedish studio is the graphic sector created in pixel art; yet if it is true that even the eye wants its part – and the aesthetics of Songs of Conquest are certainly delightful – besides the excellent pixel art there also seems to be a varied, deep and multifaceted video gameeven in this first version available in Early Access.

Lavapotion’s work is in fact available on the main digital platforms for PC as a title in the making, the development of which – according to what was declared by the team – should officially end in about a year. In the meantime, the developers will make sure to gather feedback from the community and post updates that will always introduce new content until the full version is released. However, it should be noted that already now Songs of Conquest presents itself in a state I would not say really advanced, but still close to that stage. In the version tested in preview, in fact, there are two single player campaigns, four playable factions, various maps for skirmishes, the multiplayer sector and a convenient level editor.

THE SONGS OF VICTORY

The style of play is rather classic and refers to the cornerstones of the genre. At the start of the game we have at our disposal a hero, or wielder using the term of the gamewhich can count on a small following of basic military units, as well as a settlement to grow by building economic buildings that generate resources and military structures through which to hire additional soldiers for our winger.

Turn after turn, the hero can move within a more or less vast map depending on the size of the game by collecting the heaps of resources present on the ground, or by interacting with the structures present in the game world. These can be gold mines, sawmills, ancient ruins sources of knowledge (and thus experience points), or perhaps lair of bandits to be chased away, waterfalls that can provide momentary relief (and bonuses) to the army, and so on. .

Despite its simplicity, the game world is very detailed.

It goes without saying that exploration is essential in order to not only grow the brandizer and his entourage, but also to obtain the resources necessary to upgrade the structures of one’s settlement. Then, as the game progresses, more villages can be captured and new heroes can be hired along with a sequel, so as to have more and more tools to eliminate the competition and win the game. It is clear that the adversaries will try to do the same, so we must always be careful to find the right balance between exploration, hero growth and an economic system capable of supporting the war efforts.

THE PECULIARITIES OF SONGS OF CONQUEST

When on the map we run into an enemy army, then, here is the turn-based tactical combat. First a window appears that shows us an approximation of the enemy forces and allows us to place the units in their respective initial positions, also offering us the possibility to resolve the battle automatically. If you choose the manual option, however, the view switches to a checkerboard with hexagonal squares. 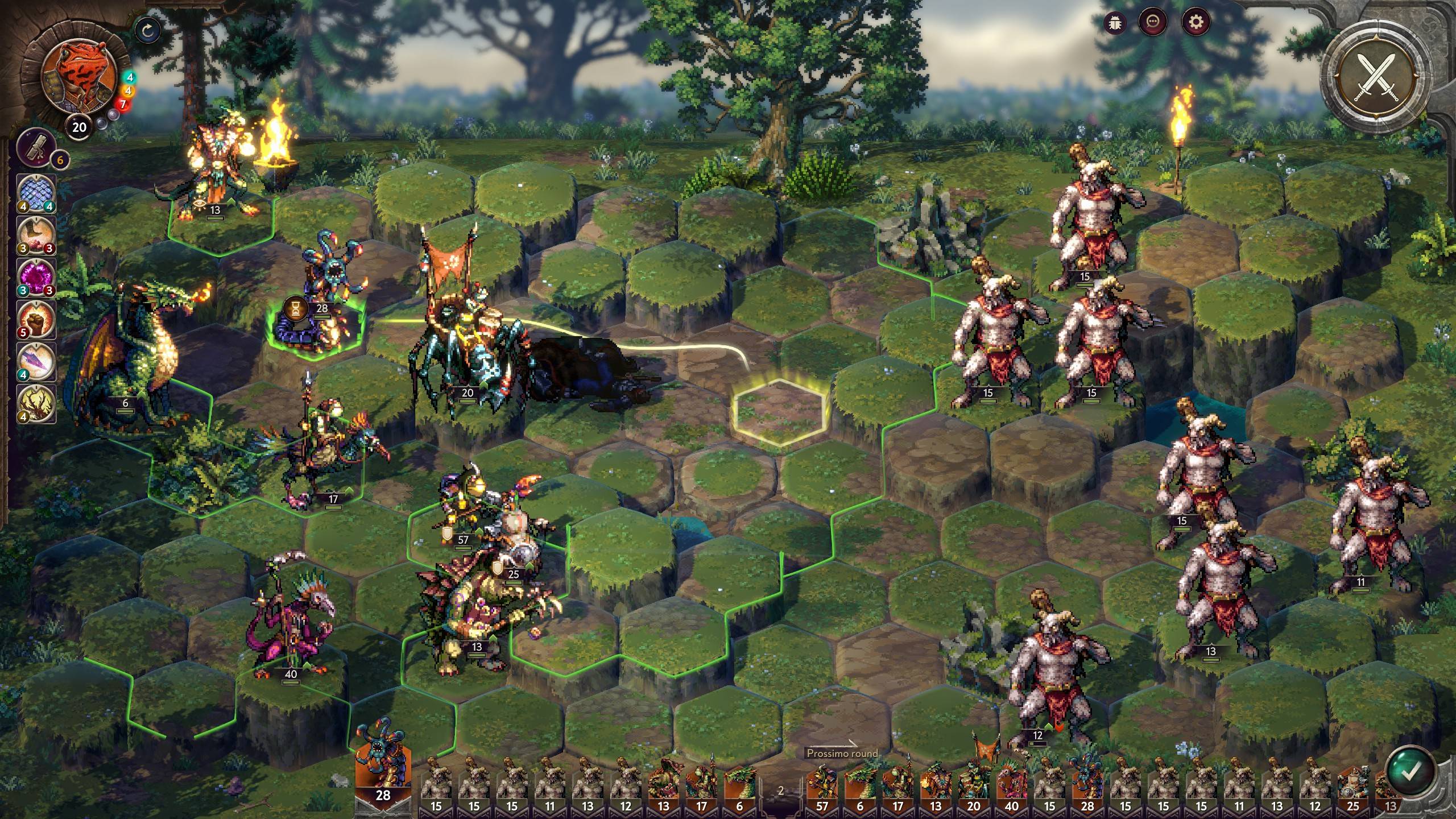 The Frog faction brings together the creatures of the swamps: anthropomorphic toads, turtles and giant insects.

Here the units they move alternately according to the order of initiative which depends on the speed of the soldiers, obviously starting from the fastest creatures up to the slowest ones. The conformation of the terrain can also guarantee various benefits, especially for units equipped with missile weapons: by placing an archer on an elevated square, in fact, the range of his weapon increases considerably, allowing him to hit the furthest targets. Many units, especially advanced ones, also have special abilities.

The musicians represent one of the hallmarks of Songs of Conquest

The presence of the musicians is interesting, representing one of the distinctive features of Songs of Conquest. In fact, each faction has access to a specific type of unit which, singing war songs, provides bonuses to all allied troops or malus to enemy ones. Finally, the Wielder is never physically present on the battlefieldbut instead can interact by casting spells by spending the essence generated turn after turn by the allied units deployed. Essence is the equivalent of mana, so to speak, and is linked to five specific elements, in turn related to different types of spells. The essence of the Order, for example, offers access to spells that empower friendly creatures, whereas the spells of Destruction are often deleterious to adverse troops. 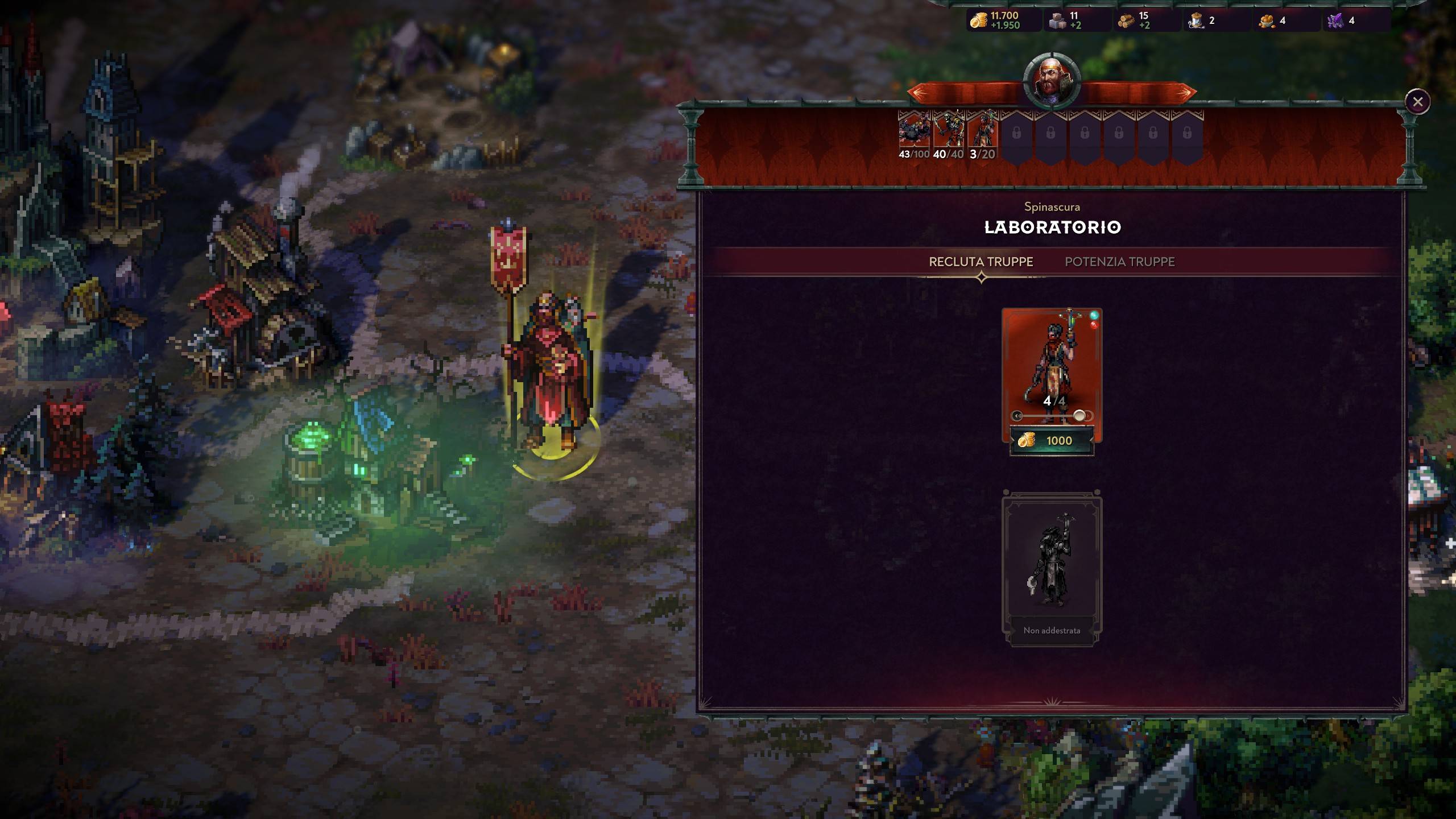 There is no real city screen, instead the structures must be built individually in the appropriate spaces on the map.

At this point you will surely have guessed that Songs of Conquest does not reinvent the wheel, but aims to offer a work that follows in the footsteps of the video games that preceded it. This does not mean that it is a trivial carbon copy of any of the Heroes of Might and Magic that have alternated over the years, but we are in the presence of a work with a very distinct personality that however, it can guarantee some interesting new elements, especially on the side of the characterization – not only aesthetic – of the factions and the game world. It should also be noted that there is still a year left before the official release, therefore it is possible that things will change from now to the release, however the foundations appear to be very solid right now.