Change is something that places the human being in front of choices: there are those who embrace it completely, opening up to new possibilities, and those who may struggle to try to avoid it. Then there are an infinite series of nuances in the middle, all with different intensity and different behaviors towards what can in effect be defined as a change in the status quo. What certainly cannot be done, however, is to block change when it arrives without the possibility of escape: this is the case of Floodland, a strategic element with a strong survival component that will put us in front of a world destroyed by a cataclysm called Eventand which will lead us to lead a handful of survivors in the reconstruction of civilization.

Whether this is as we remembered it, structured in a way very close to the previous one, or with new values ​​given the clean slate made by the Event, it will be up to you (and the clan you choose in the game): here is our review of Floodland, new game from Vile Monarch, coming on November 15.

The choice is yours

Floodland is a strategic one, which is why you expect to have to manage a group of people, but it is also a survival, since you will have to survive on little supplies and sip your expenses. Both in the test made in Cologne during the Gamescomboth in our games made for the review, we have fallen into the trap of wanting to do everything immediately, leading us to one of the biggest obstacles in the game, in a positive sense, the choice.

In fact, during the game, from the very first bars to the end, you will find yourself having to do some meaningful choices: starting from the clan, which will define your approach, in a range that goes from traditionalism to nonconformist, in Floodland you will have to decide where to invest. For example, if you focus on the recovery of resources, so as to have material to build, you could find yourself without food and therefore with the urgent need to build adequate structures; on the contrary, thinking only of the citizens of your clan and of your new society under construction, could lead you to forget that without resources you are finished, thus requiring more days to advance and consequently more food and water to consume. 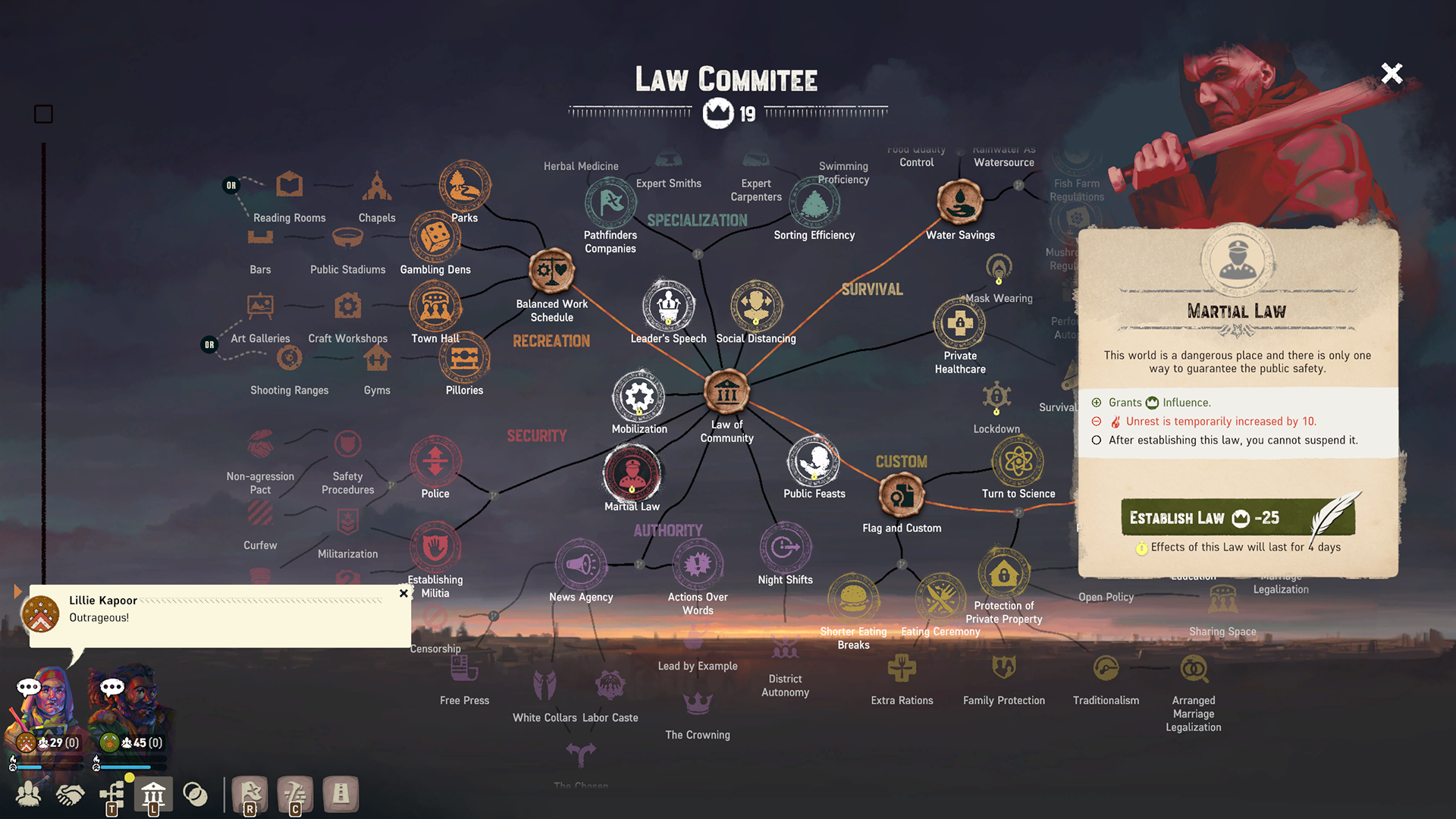 If in the first phase you will have to find yourself resources and other people to bring into your company (and advance in the rediscovery of how to work the various materials, starting from wood and scraps up to metal and concrete), in the second you will have the opportunity to meet other clans: these, who like you will have formed groups to be able to restart and survive, will have different ideologies from yours (in part or toto) and it will be up to you to choose whether to go through the diplomatic path or whether to opt for a contrast right away. Obviously the second case will push you to have an enemy, but the first could bring you unpleasant surprises later, considering that you will have to find a way to make everyone get along.

The third phase of the game, on the other hand, concerns the gist of the concept of Floodland: a cataclysm has reset, and it’s up to you to choose whether to go back to the old company or create a new one. To do this, you will use the laws, a series of actions that will push you to make limiting choices, where continuing on one side will inexorably lead you to abandon another. Going deeper into this dynamic, it will be enough for you to know that you will have to regulate leisure, security, authority, taxes, health and various and possible ones, all with choices that will push you to understand which state you want to create.

Once upon a time

Vile Monarch’s game starts from an important narrative opening, both in terms of structure and value: the world was destroyed by the Event, it is no longer as we remember it, and everything seems to point to a problem related to the climate change. Already this choice, which might seem at first almost clever, is anything but obvious and indeed shows courage. The difficulty of making a game without falling into the pitfalls of looking like a purely meaningful game was high, but the development team managed to create a really interesting plot on this theme. 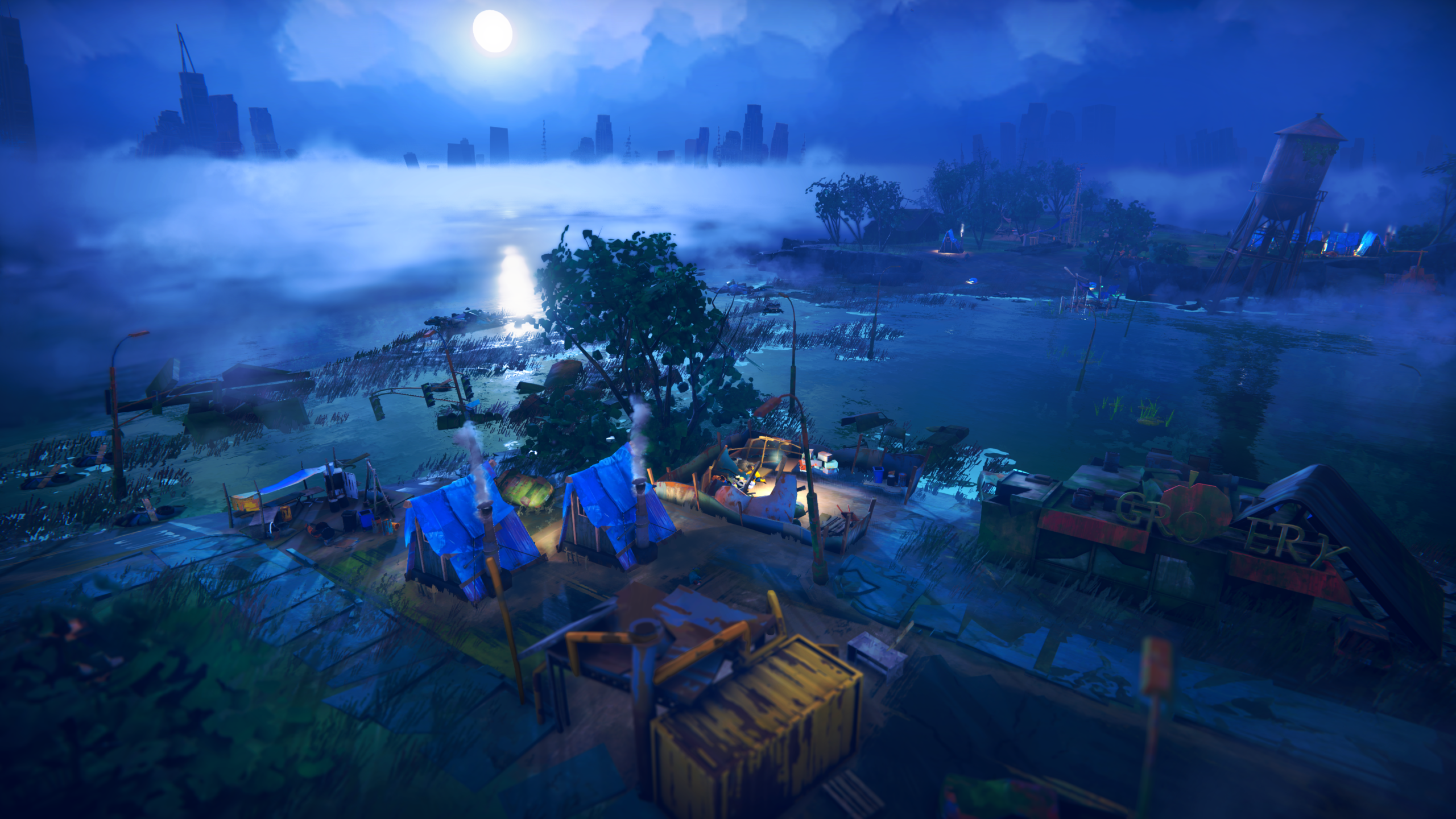 During the game you will also be able to hear some chats with the councilor (who will act as a “status voice”, highlighting shortcomings and giving you advice), which will push you to discover the lore behind this Event, what happened and what the consequences were. However, it will not be necessary to listen to everything to see what has happened, especially if you carefully observe the space that surrounds you. In fact, it is not impossible to find old abandoned, destroyed or ruined structures, bad roads and some memories of the past along the way.

As of now that we talk about it, Floodland it is not free from technical problems, on the contrary: as you advance in the game they become more frequent, considering that the variables to be managed increase. The aesthetic style chosen will mask some technical limitations but makes it rather well, especially as regards the interface, while for the polygons in the game there is a slight dissonance between structures with well-shaded pastel colors and which give an artistic sense to everything and some component such as grass and water which instead infuse some greyness. The art design of the characters, menus and every other detail is superb, with a style that comes close to titles such as Disc Elysiummaintaining a strong and well positioned identity.

Then the game music is wonderful, which will accompany you along your adventure as a trailblazer for a new company, and the information interface that manages to be minimal but to warn you and report every detail is also excellent. Unfortunately we have encountered some problems advancing in the game, especially when there are more variables and the game struggles to manage them (not so much during the action, but in the saves), but we are convinced that with a well-made patch they will be solved in a short time.