Pentiment is a graphic adventure with the main feature of being set in a world of medieval style wax and pastelsdrawing not only the artistic spirit of that current, but also cultures and traditions. Obsidian Enterteinment offers us a modest product that does not stray from their comfort zone, showing us how Pentiment is a game with a strong narrative component. Coming soon on November 15, 2022 on Pc and Xbox One and Series X / S, also included in the Xbox Game Pass package at launch.

Talking about Pentiment is not easy: Obsidian Entertainment’s latest work is certainly one of the most brilliant products that the American developer has ever developed on the artistic front, but it borders on some basic problem that could affect the experience of any gamer.

Betting everything on the visual aspect could be a move that is as winning as it is deceptivebut in the case of Pentiment we are in a rather gray area: the medieval style is truly fascinating, but as a graphic adventure one would at least expect “an adventure”; but we will discuss this in more detail shortly.

What is certainly interesting is that Pentiment will be available at launch for Xbox Game Pass and therefore available to millions of subscribers to the service. Together with Return to Monkey Island recently added to the service, which we wrote a nice review right here, the catalog of graphic adventures expands, offering the public two additions of relatively recent games for a genre that is now very muted.

The main feature of Pentiment, the backbone of the Obsidian games, is that the whole narrative structure will be based on your own choicesfrom the noblest to the most treacherous, agiving way to create a very twisted and fascinating intertwining. Having said that, prepare your artistic flair, your curiosity and a lot of patience because a murder has occurred in the city!

Pentiment and its abruptly slow start, but with an interesting plot

Let’s start by telling you the incipit of Pentiment: back in 1518 the young artist Andreas Maler he will have to travel to a small town in Bavaria to complete his artistic masterpiece at the town’s monastery. Agonized and disillusioned with reality, he lived his life dedicated to the realization of his “masterpiece” at the scriptorium of the same monastery, bonding with the friars and nuns of the aforementioned place.

The peace of his routine is broken with the arrival of a noble known to the monastery that, despite the advent of industrial printing had outclassed the costly art of scribes, the latter was keen to make his favorite books using this archaic technique.

The young artist sees in this noble a pleasant acquaintance until, suddenly, a terrible thing happened: someone died at the monastery and a close friend of his was accused of being the murderer. It will be up to the protagonist to discover the causes of death, through intrigues, lies and many twists.

What certainly makes us turn up our noses is that to get to the real beginning of the game, that is the murder scene, it will take a few hours. Even if the whole preamble serves to set the protagonist, through the choices of birth and past life, such as studies or other factors, which will determine exclusive combinations of choices, the narrative is really slow and we ourselves were initially unmotivated in continuing the game. 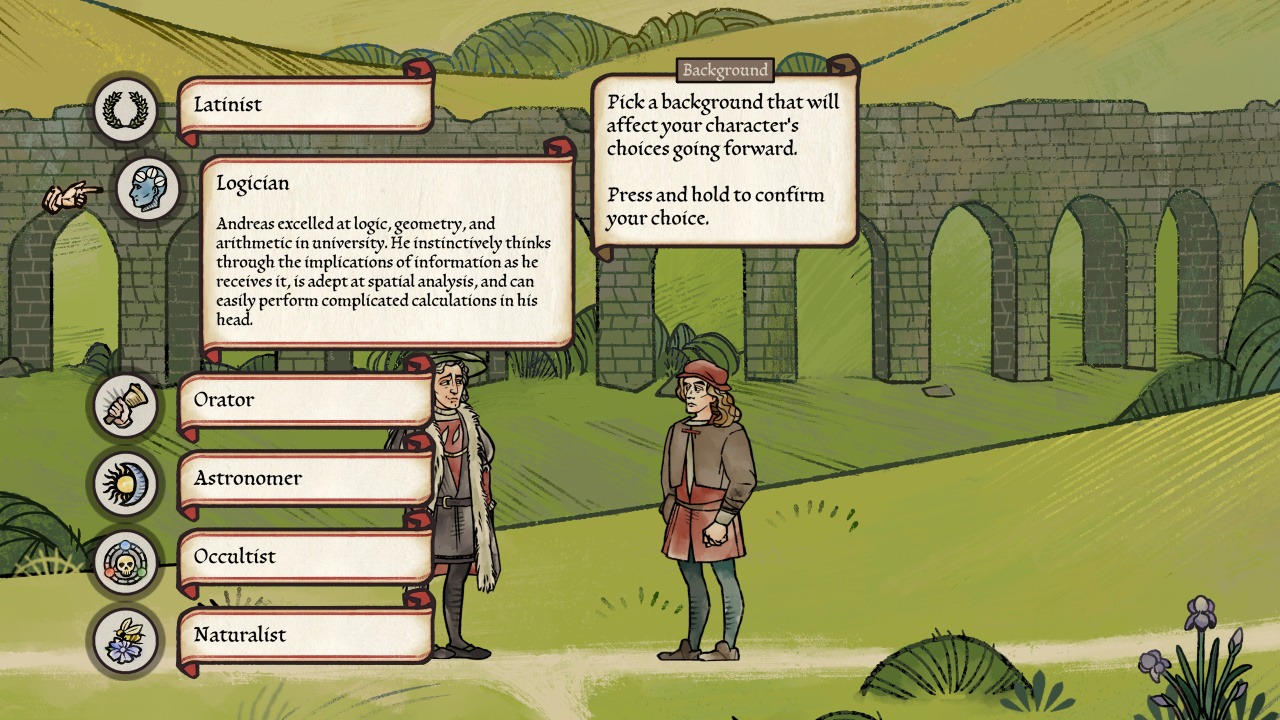 This clarification is due to the fact that the same developers promote the game as “suitable for everyone“, but due to the difficult start it proposes, we do not agree so much. However, if you manage to overcome that abrupt obstacle, pad in hand we find ourselves with an extremely deep game on the narrative side where we have always felt satisfied for our choices, even if it still lacks an extremely heavy slowness in some points.

Any choice we make should be more than aware of it because a poorly spoken word could lead to something unpleasant. Furthermore a factor that we really liked is that the player has to put himself in the shoes of a 16th century artist, in order to have attitudes suited to his character and context.

In case of difficulty there will be multiple aids that direct the player to the choice they prefer, through “personalities” that represent different types of social status. With the continuation of the adventure there will be other aids, especially during the exploration, which however we will not go into further as a spoiler. 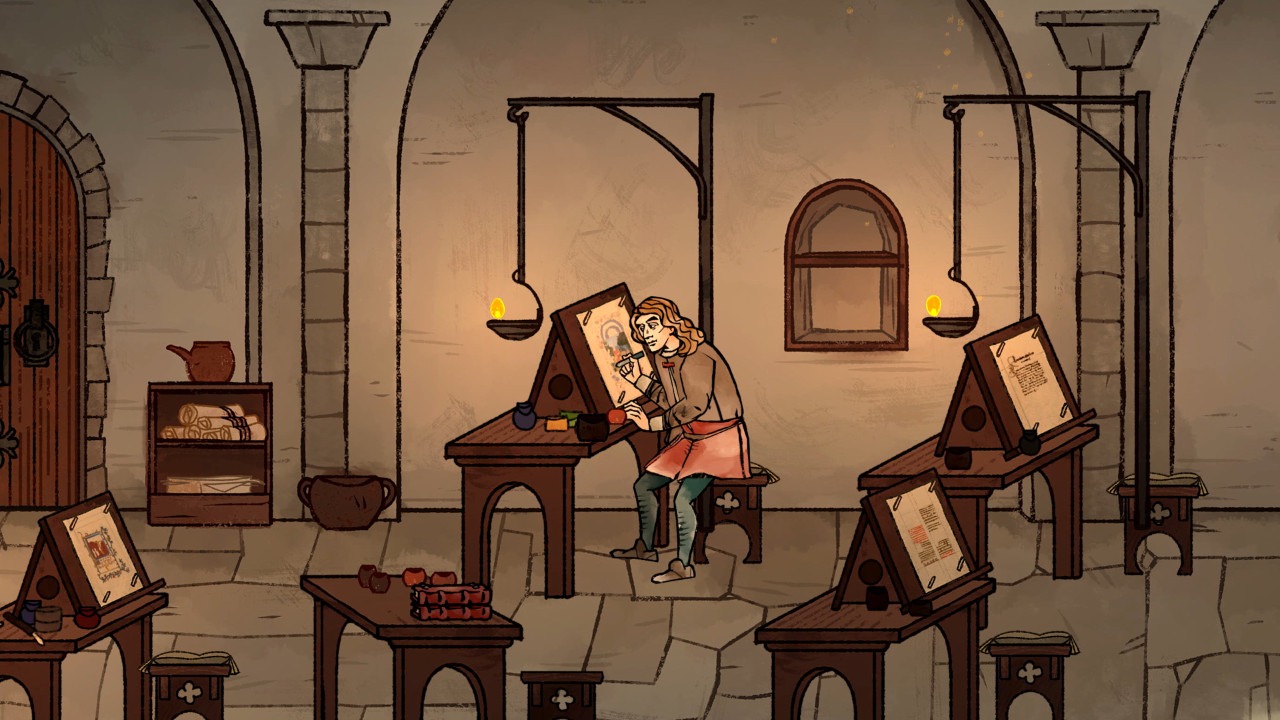 A living world with many stories to tell

But what certainly shines through in this colorful world of watercolors is the life of the characters: each of them has a story more or less intertwined with the protagonisthowever, leaving an indelible mark on what is the canvas of our adventure.

Anger, despair, sadness, happiness, compassion, conflict and many other feelings we will go to live, and see, through the drawn faces of the characters on Pentiment. On its many hours of play, also determined by the choices that the player will face, there will be many important scenes which, for better or for worse, will be fundamental for the growth of Andreas.

In all this, as for a great graphic adventure that respects itself, there is no shortage of puzzles to solve, both deciphered and environmental. Some simpler than others, even if one of the main puzzles, which will accompany us from the beginning of the game to the end will be, it is incredibly interesting to solve, especially for plot purposes. 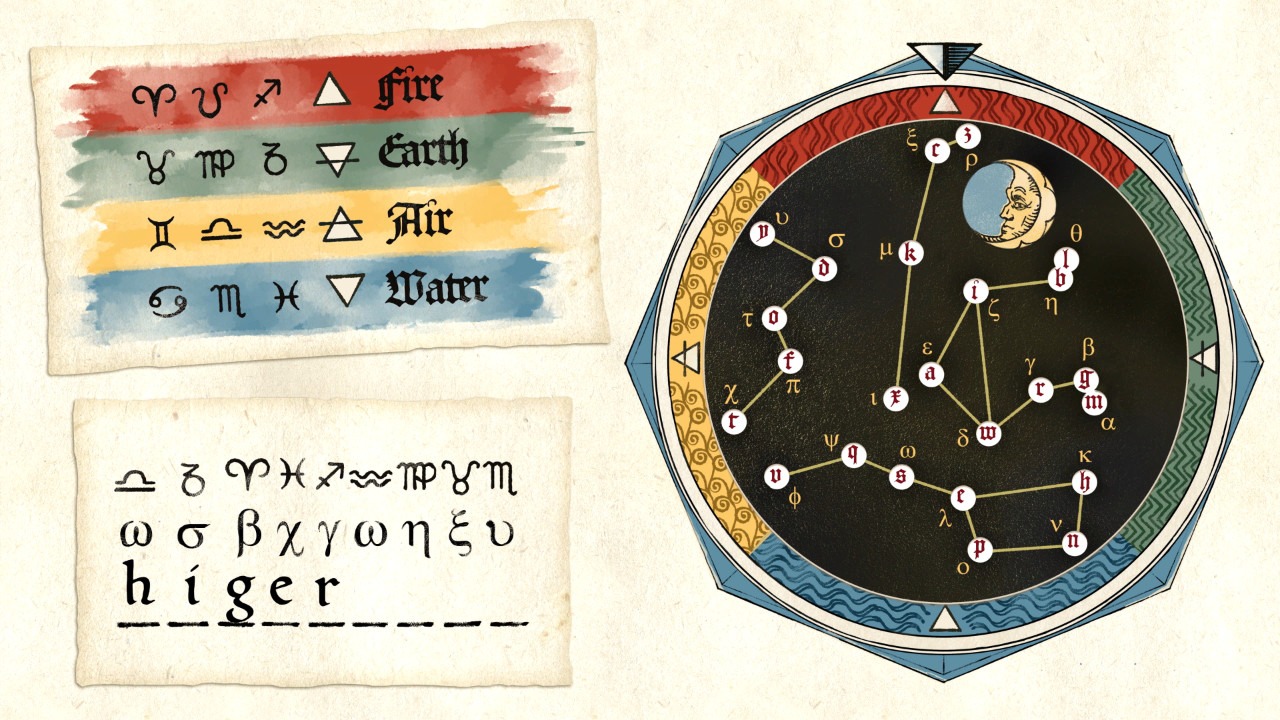 Even if the exploration is exhaustively linear, Pentiment shows us different settings in two dimensions of a certain charm with a certain complexity. The various designs are adapted according to the thoughts and mood of the protagonist, trying to represent realistic settings anyway. Very cute that too the cartoons of the lyrics are related to the social class or work of the character who is speaking, where the clericals have a more laborious writing and the peasants a faster and full of errors.

There is little to say about the sound sector because… it almost doesn’t exist. The only sounds that are heard are the environmental ones, also surrounded by some musical pieces, those of interaction and those of the writing of the dialogues (because together with the typology, there is a different sound), but otherwise nothing. There is no dubbing, but the game reserves itself an almost global adaptation.

Together with the narrative sector, the graphic one is certainly the driving force of this game on which most of the marketing has focused on exposing. There is very little to say about this: it is really beautiful to see. Each illustration looks like a medieval painting and all the artworks have very well defined characteristic values. Combined with a compelling, albeit difficult to grasp, story Pentiment shows itself as a great interesting game for lovers of the genre … even if perhaps too tied to it. 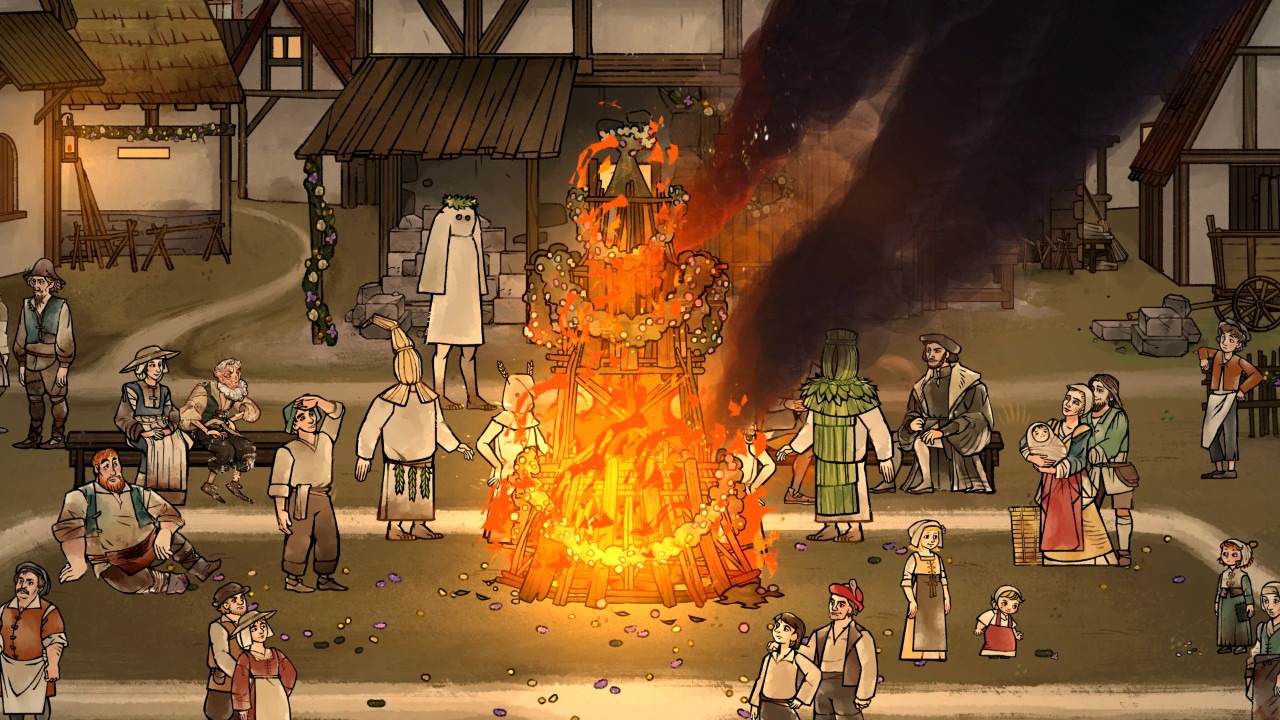 Pentiment is the new work of Obsidian Entertainment set in a world that has now reached the end of the medieval era, but with a strong artistic inspiration linked to it. Despite being strong in a well-intertwined narrative sector, Pentiment does not shine in the sense of enjoyment of the game because it is excessively verbose in many scenes, making certain sections of the game heavy. From a certain point of view it can be considered a value because it allows you to deepen many characters and leave a good memory of them, knowing them in depth, but on the other hand it makes the game much slower. It balances this problem the extreme artistic inspiration it holds, enriched by many curated and interesting choices under that front. The adaptation of multiple languages, including ours, is also excellent, but it is a pity for the lack of attention to the sound sector.