We finally got to the season finale of Halo TV Series, with the episode 1 × 09 “Trascendence”. We have seen some good and bad things, which we have already gutted with all their rottenness in the previous episodes of the review. Others have to wait for the analysis under the knife of the second, dreaded season, that of a product that even its co-producer has publicly admitted is not “what he had written”.

Halo TV series, it would seem over… for now.

What we can say for now is that Halo TV Series broadcast on Sky e NOW he was able to dig a pretty deep hole during the first half of the season, then slowly pull himself out by providing better episodes thanks to a more storyline. focusedwhile always maintaining a good level of direction. That said, that hole remains and is still very deep after the Season 1 finale, but it’s tending to fill up with something else, which is something. However, some characters and subplots who have so far traveled on their own remain there, abandoned and inconclusive as expected.
Like few and well-appreciated before him, this episode also focuses and remains on the main plot, in the intertwining of ChiefHalsey and the Silver Team. Eh, finally. Below, the writers can be heard as with herculean efforts they attempt to iron, pull, sew and reconcile the numerous nonsensical subplots that may never have arisen over the course of the season. The same writers, always armed with glue and rounded-tip scissors, try to raise the general interest in preparation for the second season. Evidently, more conviction was needed, because theepisode nine of Halo TV series looks more like a mid-season finale than a season finale – nevertheless we don’t complain too much: after eight episodes, some of which are memorable and others barely saved, at least this gives us a worthy conclusion of events.

The story so far

This episode picks up right where the last one left off with the aftermath of the revolt of Halsey. The tension is still high as Reach is in ruins following the energy boom caused by Makee while activating the artifact. Seemingly disappointed with humanity, Makee has returned to her original mission of returning the remaining artifact to the Alliance Covenant. Meanwhile, the question of Spartan “Wandering” is once again confronted – needless to say that Vannak and Riz have been confronted with the truth since last episode.
Fortunately the captain Keyes is there to admit the truth and his involvement much to the chagrin of his daughter Miranda. However, the past must be put aside to deal with the current situation with Halsey and Makee, both runaways in their relative environments. While Master Chief, Vannak and Riz chasing Makee, Kai chases Halsey. While Kate Kennedy’s notable sequence as Kai is among the most satisfying of the episode, both missions fail with their goals on the run.
At that point, a spark of anger finally shines among the Spartans, used for decades, robbed of their past, controlled by an evolutionist maniac. The assembled Silver Team then goes full speed towards the home planet of the Covenant, hitherto elusive to the UNSC. The journey through uncharted territories is guided by John’s instinct, who fortunately manages to make them overcome the barrier-kaleidoscope that protects the planet from prying eyes. In the meantime, it becomes clear that for the Covenant Makee was never blessed or important. Her integration is simply one farce to reach an end – to reach the sacred Halo – before leaving her to die with the rest of humanity.
The planet’s defense is weak at first, but soon becomes overwhelming, enough for the Spartans to hire a long and exciting confrontation with aliens, putting on a show with rich visual effects. Once the artifacts are triggered, John is left vulnerable at one point, transported with Makee to the bucolic land of the Halo, while the others are on the battlefield to face the Covenant threat.

What to expect from the second season

We can’t tell you so as not to spoil the scene, but there is a climax that works thanks to Schreiber And Taylor as John and Cortana. In the end, what comes out is one version from Master Chief which is close to that of the video game and is the one that many wanted to see from the beginning, the one that the public thought of when Halo TV Series was just an embryo of a product at Paramount +. The writers try to make peace with an audience that has noticed gaps and gaps in the plot to no end. How long the Master Chief remains in that state and / or how it will evolve will certainly be an important sticking point to address in the second season.
Ultimately, this first season is (as expected) all a huge one prologue, although it has often been inconsistent in its implementation. While not without its problems, the latest episodes have shown that they can arrive at a good level qualitative in storytelling and action, while the earliest and most aloof (like the one about Kwan and Soren) most likely cost the show hundreds of viewers – something the series will have to deal with sooner or later. Halo TV Series therefore settles in the hall of mediocre series but with a future, despite a troubled production for many reasons, primarily for the setting of this Origin Story during the first half. 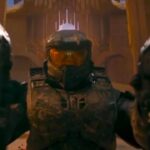 The latest installment of the season of Halo tries to make peace with the fans of the videogame saga. Beyond the numerous problems – characters who have suddenly disappeared, unresolved questions and so on and so forth – everything is confirmed as a great introduction to what will have to happen in the coming years. But betting everything on the second season, when the first one left more than a few perplexities, will it be the right move? We will see. Meanwhile, the first series does not move from a general mediocrity.