Analysis firm Newzoo has made public its global report on the video game market in which it advances that in 2022 this sector will generate income of 184,400 million dollars, 4.3% less than last year. The company highlights that 2022 is a corrective year after two years with revenue above expectations due to the pandemic. Newzoo has also acknowledged that in its May forecast it overestimated the strength of this market once the COVID-19 restrictions were lifted.

The sector that shows the best performance in a year with declining revenues is PC, which will end 2022 generating 40.5 billion dollars, a year-on-year increase of 0.5%. If we remove browser games, which experienced a fall of 16.7%, we see that the PC games market alone enters 38.2 billion dollars, 1.8% more than a year ago. The resilience of this sector is explained by three reasons: the greatest successes sell for years (even decades), the indies they feel comfortable in it and both in China and Japan the income goes up.

We continue with consoles, which in 2022 will generate 51.8 billion dollars, a year-on-year drop of 4.2%. This market is mostly driven by big releases and the lack of AAA titles has been noticeable. Newzoo does not forget that Call of Duty: Modern Warfare II has recently proven to be a commercial success, possibly joined by God of War Ragnarok, but maintains that the success of these titles alone will not compensate for the decline of the first half of year. Soon a new Pokémon will also arrive.

Regarding the mobile games market, it is the one that suffers the most. Its revenue in 2022 will be 92.2 billion dollars, 6.4% less than the previous year. In this case, the explanation is found in the lower spending after the pandemic by players from the three major Asian markets: China, Japan and South Korea. In particular, Newzoo points to the drop in revenue that titles like PUBG Mobile and Uma Musume Pretty Derby have suffered.

Finally, two notes. In 2022, China and the United States will generate 49% of the revenue of the video game industry worldwide with spending of 45.8 and 45.000 million dollars, respectively. On the other hand, Newzoo forecasts a promising future for the video game market and anticipates growth to 211.2 billion dollars by 2025. Despite difficult times, the company maintains that video games are part of the lives of consumers and this will not change. 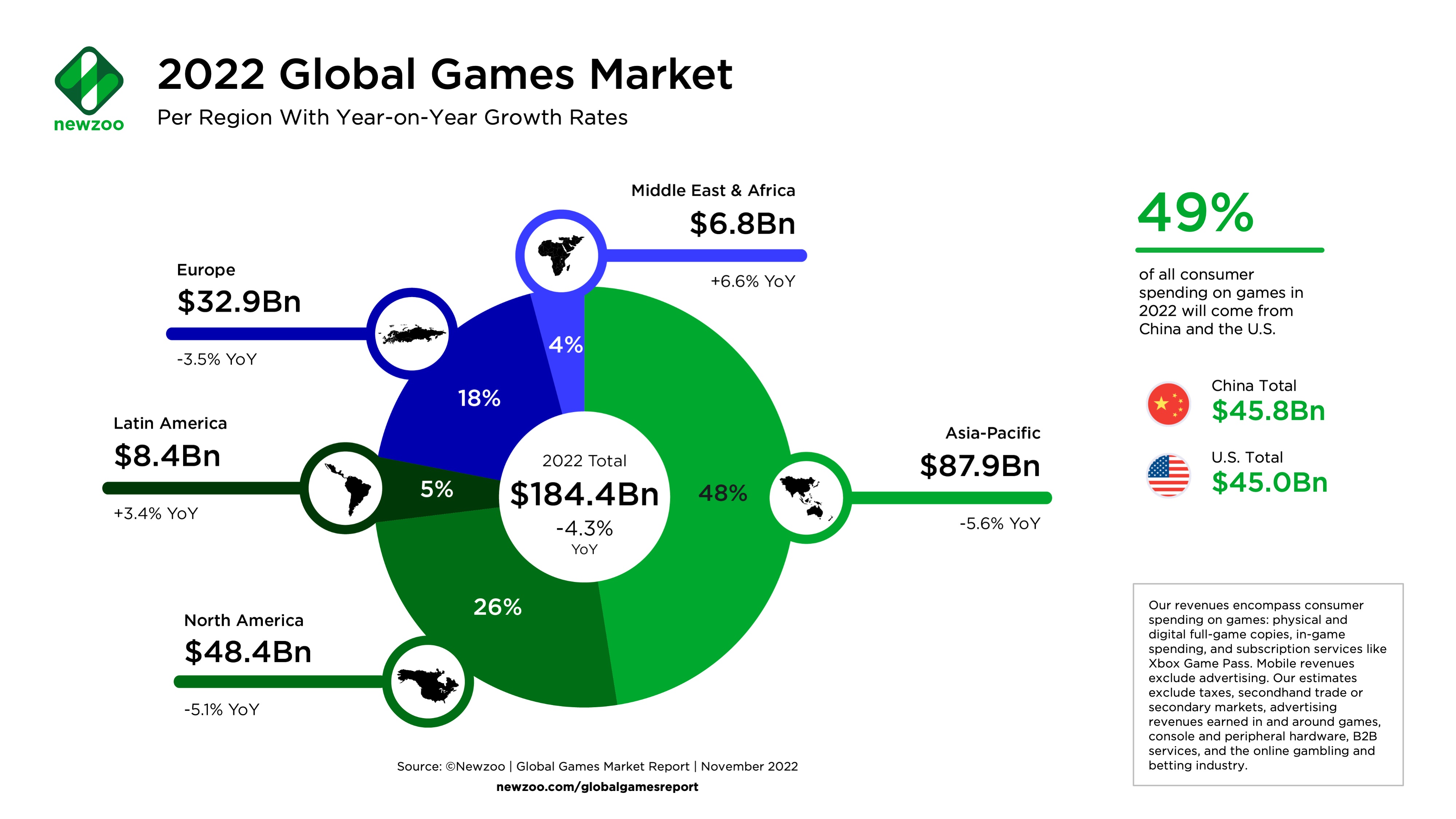