The genre of investigative adventures is experiencing a second youth, thanks to titles (the various Sherlock Holmes in a nutshell, followed by a plethora of Microids) more and more popular and appreciated by the general public. As evidenced in the brief opening, the shape of the graphic adventures it is the one that best managed to embody the spirit of this genre, due to its obvious design features. With Crimesight we witness, for the first time, a complete overturning of the cards at stake, finding ourselves analyzing not a graphic adventure, but rather a PvP, along the lines of Among Us, of clear investigative matrix. He will succeed Konami to give yourself a pleasant gaming experience or will we be faced with an intriguing but unsuccessful experiment?

Year 2075: in the midst of a technological evolution capable of overcoming any logical style, we have witnessed the creation of an evolved artificial intelligence to the point of being able to predict 90% of crimes avoiding, like a Big Brother ante litteram, any deviation from the lines of pre-tax conduct.

However, something goes wrong and we are witnessing the genesis of an even more advanced artificial intelligence, called Moriarty, capable of carrying out crimes so sophisticated as to be unpredictable. Drawing inspiration (and paying, in fact, homage) from the novels of Sir Arthur Conan Doyle, the race for cover corresponds to the appearance of a further AI, nemesis of the previous one, called Sherlock, in order to counter and cancel the huge flaw opened in precedence.

A game of chess played with few pieces and limited movements.

We will therefore have a genius of crime capable of setting up plots and tricks capable of freeing the dense controls of Foreseght, this is the name of the original artificial intelligence, thus making it possible to carry out heinous and ingenious criminal acts; Moriarty will therefore have to deal with Sherlock, an AI that, due to deductions and strategy, has the potential to stall its direct antagonist.

And here end, alas, the analogies with the works of Conan Doyle: no plot or direct or derivative narrative to accompany us between one mission and another. We will therefore be forced to settle for an interesting narrative premise, which unfortunately loses much of its narrative potential in a nutshell at the beginning of the adventure itself.

In this regard, we immediately clear the field of various and possible doubts: Crimesight is not a graphic adventure mixed with a strategic component. The similarities, indeed, are to be found in Among Us, direct (and not too hidden) point of inspiration of this hybrid creation made in Konami. In this regard, unlike Among Us, we won’t have any PvE modes but we will be forced to play exclusively PvP, a strange choice at least, considering that the excluded mode would have represented a great way to familiarize yourself with the mechanics, albeit simple and schematic, of Crimesight. And it is already in this description, albeit synthetic, the main peculiarity, which at the same time becomes the main limit, of Crimesight: a schematic repetition.

A PvP along the lines of Among Us

Three of the four players will find themselves emissaries of Sherlock and the remainder will take the place of Moriarty. The first three will have the task of unmasking the fourth, the latter of setting up a criminal plan thanks to which to annoy the predestined victim. This will happen through the management of six pawns, corresponding to as many characters (renamed, each, with the first name of six famous crime writers). Among them there will be murderer and papabile victim: obviously the two will be visible only to the player impersonating Moriarty while the counterparts will have to work by deduction, observing the movements of the pawns in the various rooms of the villa (a sort of Cluedo board of today) in order to discover any machinations and unmask the murderer’s plan. The players impersonating Sherlock will be able to move three pawns at a time while Moriarty will be able to move only two at a time: it goes without saying that the killer will not be able to move the victim, for not having the task excessively facilitated. In the same way, the assassin will always move first, thus blocking any movement of that particular piece by the antagonist team.

However, we will have to move the pawns in the house to remedy (has already been said Among Us?) Any inconveniences of the path in the mansion (gas leaks, lack of electricity) and to feed the characters. Failure to comply with this task will lead them to be less reactive and therefore become easy targets for the “assassin” team. At the end of each day Sherlock, the “good” AI will sum up the events, providing useful clues to advancement in the deductive phase, and to the contextual unmasking of the murderer.

If this does not happen, we will have to resist (avoiding to die badly) for ten days in the villa, dodging the continuous attempts of the player / Moriarty to prematurely end our stay in loc (ul) o. To diversify the gameplay, if enabled, however, in the match selection phase, a further enemy AI, whose only task will be to create diversions, moving one character at a time, in the end to mislead the investigations and give way to the Moriarty team to have reason of that Sherlock.

If, at first glance, all this could be interesting, from the very first hours of the game we are witnessing a schematically repetitive style that will affect, not a little, the replayability coefficient of Crimesight which, in the current state of things, does not has received any updates in the form of diversions or a “season 2” mode. The only three maps available, so far, in the day one game offer, immediately present the account in terms of longevity and gameplay variety, relegating Crimesight to being only the ugly, and restricted, copy of Among Us, a chess game played with few pieces and limited movements.

Graphically, Crimesight lets itself be looked at, without making one cry out for a miracle and also the design of the characters, caricatured but never particularly inspired, does not shock for the accuracy of the realization. 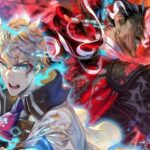 Crimesight represents, on paper, an interesting variation on the theme of detective games, replacing the “graphic adventure” form with an unprecedented design in the PvP field, trying to follow (but largely failing) what we saw with Among Us, a title to which the Konami product is clearly inspired. The lack of variety in game situations and the absence of a relevant narrative sector nullify excellent premises, which have remained so only on paper and condemning, unless future additions to the game offer, Crimesight to an imminent fall into oblivion. Fun, for heaven’s sake, with interesting game mechanics but, alas, too monotonous.