We were able to preview Card Shark, a particular title published by Devolver Digital in which the game of cards is at the center of the adventure, with a very important constant: play as dirty as possible.

Simulator of cheating, eighteenth-century adventure and game of dexterity, each label suits him and none excludes the others, but the only truth among the thousand lies of Card Shark is that it comes to a creature more unique than rareit makes no sense to try to pigeonhole it according to convention.

If, like me, you have always admired and a bit envied those who can perform the “magic” with the cards, all you have to do is put the next work of Nerial in wishlist and continue reading the preview.

JOY AND PAIN IN THE LIFE OF A CHIEF

The doubt arose during the presentation: Card Shark it’s one of those hard games to frame until you try it. How could it be otherwise? Card tricks, deceptions, two-dimensional court intrigues e an exquisite art style, all topped off with adventurous gameplay. And then a fascinating setting, the eighteenth century and an alternative reality compared to the pre-French Revolution era known to us since it all began on a foggy morning in 1743 near Pau, in the south of France. Impersonating a boy lacking the word and the esteem of the owner of the tavern where he works, one immediately runs into that handsome fellow of the Count of Saint-Germain but soon the situation worsens, forcing the unlikely duo to go into hiding.

The scene from which it all begins. The protagonist is the boy next to the sciura with the yellow skirt.

Here begins a journey through various French locations and a succession of gaming tables of all kinds, but it is useless to go further because there is a narrative component and it would be a crime to reveal where it leads. It is not telling how this journey takes place, a path that does not want to know how to set a foot in law but, on the contrary, makes the illegal the only way to go in a country more complicated than it seems at first sight.

Card Shark deals with cheating and the art of swindling others without them noticing, it is not a card game but it is a card game. Yes, because with the cards you play and the same is done with the opponent, so much so that the goal is not to win every game because it would arouse suspicion but to extract as much money as possible from the unfortunate person on duty by exploiting all the knowledge acquired to the tune. of training. This is how the world goes, the ability to cheat can be refined to transform it into a refined art and it is curious to discuss it with Voltaire, one of the many characters between real and fictional that we will come across.

WOW, BUT… HOW DOES CARD SHARK WORK?

Card Shark provides 28 “magic” tricks and he is ready to teach us if we show that we are worthy robbers, ergo there is a need to make our brains and hands work to remember every step. As good novice cheaters we will initially be guided by some mentors, however as we advance in the game the gameplay releases the reins giving us the freedom to decide which tricks to use to overcome a certain scene (the challenges we will have to face). The tricks I’m talking about are mini-games / QTE based on dexterity and memory, speed of execution and thinking. The constant is the suspicion bar, a sort of visual alarm that indicates when it is necessary to force the hand or when it is better to let the victim win, unaware of what happens only until we fail a procedure. 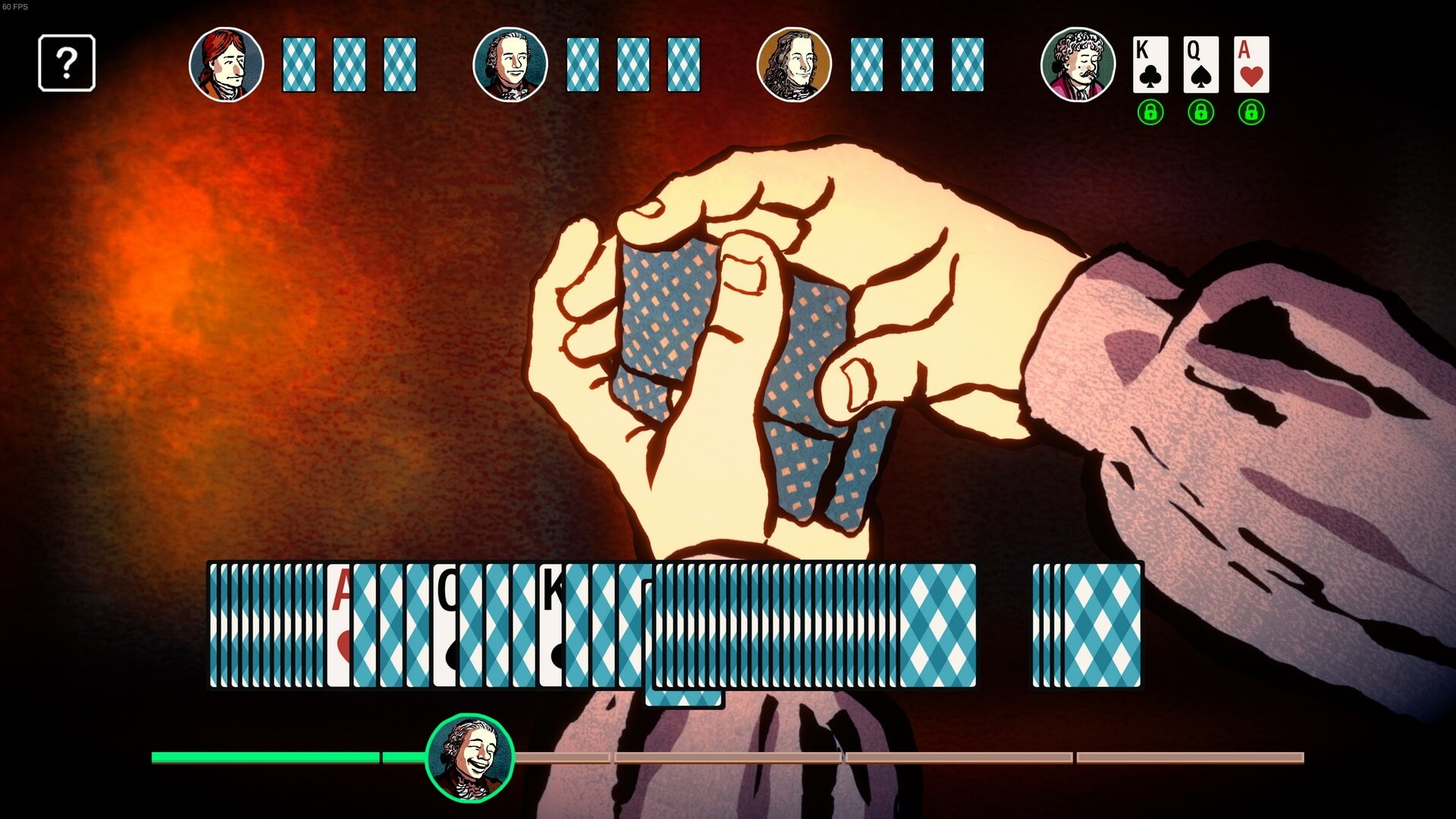 Here you have to distribute the cards so that the highest ones reach the accomplice. Yes, easy winning is beautiful.

One of the first tricks works like this: while pouring red wine to the victim (by holding down a button and moving the mouse down, being careful not to pour too much or too little) we must peek at his hand and make a mental note of which suit he has the most cards in. Once this is done, use a cloth to clean the game table and, moving the mouse according to precise signals agreed (three times clockwise means three cards of hearts, to understand) previously with our accomplice, indicate the suit and the number of cards so that the deception is successful. While the scam is ongoing the suspect bar scrolls therefore the time available to us to complete the trick correctly decreases. Even aiming without criteria is a way to make the victim suspicious, so if finances allow it, it is sometimes wise to lose on purpose to calm the situation. A scene is overcome when the opponent cannot match our bet, by the way.

While being just a preview Card Shark has already convinced me. The biggest doubt is about replayability, it seems to me a one-shot experience rather than a game to return to again and again, but thinking about it is it really that important in a similar work? The basic idea is terribly original as are the mixture of QTEs, mini-games, jokes and situations, not to mention a brilliant execution, a credible and incredible context at the same time obtained by exploiting the beliefs of the era of the Enlightenment but also a mute protagonist that it is up to us to communicate by choosing the expression of the face that we deem right each time.

The more I play it, the more I am convinced that it has all the credentials to turn out to be one of the most original titles of the year

To this are added an elegant artistic direction capable of thrilling with a disarming simplicity and a perfect soundtrack, and here I have to stop for reasons of space. Devolver Digital is a guarantee, the works published by the Texan publisher are often of excellent quality however you never get used to being amazed and Card Shark is the proof of this. This time it’s up to Nerial (Reigns authors) and Nicolai Troshinsky to surprise us with a real stroke of genius on PC and Switch. Card Shark is a pearl of design, the more I play with it the more I am convinced that it has all the credentials to turn out to be one of the most original titles of the year. The publication date is June 2, just missing: keep an eye on it but never lose sight of your purse, please. You never know.